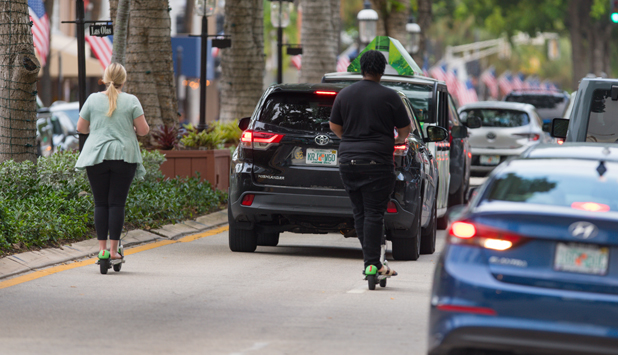 ESHB 1772 updates state guidelines for the operation of “motorized foot scooters,” defined in RCW 46.04.336 as:

a device with no more than two ten-inch or smaller diameter wheels that has handlebars, is designed to be stood upon by the operator, and is powered by an internal combustion engine or electric motor that is capable of propelling the device with or without human propulsion at a speed no more than twenty miles per hour on level ground.

Further, while ESHB 1772 restricts the speed of scooters on roads and bike lanes to 15 miles per hour statewide, the bill also authorizes local jurisdictions to set maximum motorized foot scooter speed limits for sidewalks and pedestrian and bicycle trails if that jurisdiction has authorized the use of e-scooters in these areas.

ESHB 1772 also includes among the list of methods that local authorities can use to regulate the operation of e-scooters: The determination of whether shared e-scooters may be operated within the jurisdiction, and if so, where; as well as reasonable fees and taxes that a jurisdiction may require bike share operators to pay.

Preparing for a Growing Industry

In addressing e-scooters, the legislature is likely hoping to give local governments some power in regulating a fast-growing industry. A 2018 report from the National Association of City Transportation Officials illustrates how quickly e-scooters use has grown over a short time, from being virtually nonexistent in 2017 to having more than 85,000 e-scooters available nationwide in 2018.

The report also notes that while the e-scooters are more expensive to rent (roughly $3.50/hr as opposed to $2.50/hr for an e-bike), their ease of use is making them more popular with users. Bike share companies like Lime, Uber, Spin, and Bird have taken note and are pushing hard for e-scooter inclusion in markets that already host bike shares, such as Seattle. And, with the rise of the e-scooter has been drop in emphasis on e-bikes and the outright disappearance of manually operated bikes from bike share programs. In 2018, ridership on e-scooters surpassed that on e-bikes nationally.

Bird, Razor, Lyft, and Lime all have been expanding their e-scooter services in locations across the country, including here in Washington.

Shared e-scooters function the same way as e-bikes: the scooters are dockless, meaning they can be ridden—and left—anywhere. Using an app, riders pay $1 to unlock the scooters and then $0.25/minute for the ride. There are several bike share programs Washington, including the oldest and largest program in Seattle, however, only five jurisdictions currently offer established or pilot micro-mobile transportation programs incorporating e-scooters: Spokane, Tacoma, Everett, Redmond, and Bothell.

Last fall the City of Spokane launched a successful pilot electronic bike and scooter share program, which logged 108,000 e-scooter and 40,000 e-bike trips in a brief, 2-month window. Using lessons learned from the pilot, Spokane partnered with Lime in May 2019 to launch Wheelshare, a permanent program featuring electronic bikes and scooters. Spokane's Municipal Code Section 16A.62.035, adopted in March 2019 to address “motorized personal transportation devices,” covers some interesting features of the program including:

In Tacoma, Bird and Lime were permitted to launch e-bike and e-scooter share programs in the fall of 2018, and together brought a combination of 500 e-scooters and 100 e-bikes to the city.  E-scooters proved so popular that Lime doubled the number available in the city and removed the e-bikes entirely when it’s permit was extended through September 2019. Bird’s participation ended with the pilot program.

Everett began a scooter sharing pilot program this past May with Lime, which currently operates 200 scooters in the city.  This agreement outlines where scooters can operate (not on sidewalks) and park and how often they must be picked up from the streets, and it contains a provision that the city receives a one-time fee ($500) along with a per trip fee ($0.10) for every trip initiated within the city limits.

Everett is also requiring Lime to provide data on customer complaints, reported injuries, and the scooter travel data. Customers and bike share operators will have to follow the Everett Municipal Code Chapter 46.80, which covers motorized foot scooters and all other wheeled recreational devices.

Redmond’s bike and scooter share pilot program began in July 2019 and will run until May 2020.  It requires all users to wear a helmet and to park the bike in the furniture zone of the public right-of-way once a ride is finished. Lime has been authorized to add additional e-bicycles in the future but there’s not a specific time for when that could happen. Facilitating the effort is Redmond’s Transportation Master Plan, which has long called for ride-share services in order to help provide increased travel choices for residents and visitors.

Effective Friday, July 19, Bothell began a 90-day pilot e-scooter program with Lime, hosting a fleet of up to 100 e-scooters. During this trial period the city will look into safety concerns, e-scooter usage, and integrating scooters with other modes of transportation. Minutes from the June 4 Bothell City Council Agenda (pps. 91-104) note the many pieces of information the city council reviewed in considering the pilot, including an indemnity agreement with Lime, permit info, liability insurance, and a map of hot zones the city planned to target for program implementation.

As one of the largest cities not running a scooter-share program, companies are chomping at the bit to enter the Seattle market. Mayor Jenny Durkan said she would support a program if the companies offering it agree to agree to four conditions: equity and accessibility, fairness to riders, safety and indemnification.

However, a pilot program won't be allowed to launch until a scooter share permit is passed by the Seattle City Council, and once that happens, Seattle transportation officials will draft a new version of the city’s bike-share permit to incorporate scooters. When this will happen is still in the air: Seattle officials spent more than a year studying dockless bike-share before crafting permanent regulations for those services. Additionally, Seattle’s municipal code doesn’t currently allow scooters to ride on sidewalks or in bike lanes, which will require a change in the code.

Leah joined MRSC as a Communications Coordinator in the fall of 2016 and manages MRSC’s blog and webinar training program, in addition to developing website content.
VIEW ALL POSTS BY LEAH LACIVITA
MoreHide

New Property Disclosure Requirements Will Impact Some Cities and Counties

Guerrilla crosswalks and homemade signage: the promises and perils of DIY urbanism

Does MRSC have an overview of new state legislation from the 2020-21 Legislation Session affecting local governments?