Getting What You Want Through Foresight and Creativity 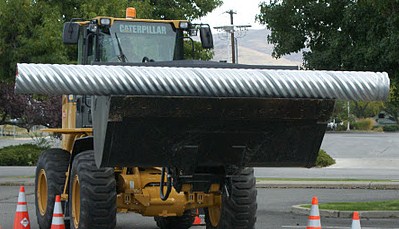 So sang The Rolling Stones. I have found that sometimes you can get what you want, and what you need, by using a little foresight and creativity.

When I was city administrator, my city received some federal block grant funds to extend sidewalks across what had been a former railroad right-of-way. The intention was to improve pedestrian access and safety and encourage new development along a state highway running through town. The city matched the block grant with some of our own funds from various sources, and we were able to build new sidewalks or repair or replace several blocks of sidewalk in an area where they were really needed.

We had no funds to include street trees in the project, but, in the course of construction, I asked the contractor to include some square concrete sections, slightly thinner than the rest of the sidewalk , at approximately every 30 feet along the curb.  These squares could be easily knocked out to expose ground, if we got the opportunity to plant trees at some later date.

Within a few weeks of completing the project, the president of the local chamber of commerce called to ask what the “little squares” in the new sidewalks were for.  When I told her, she said, “I thought so. Let me work on it.”

Not long after, she called to say that she had been working on getting donated trees to plant in our new sidewalks. Through her public-spirited efforts and those of others in the community, dozens of flowering cherry trees were donated.  A local contractor donated the topsoil, the power company used a power pole auger to dig the holes, and volunteers from the chamber of commerce and Rotary club planted the trees.  All I had to do was have the city crew break out the “knock outs” that had been created and cut a few more holes in some of the older sidewalks downtown.

On a single Saturday morning, the volunteers planted dozens of little cherry trees that have now grown and beautified the community for more than 20 years - all from just a few concrete square “knock-outs” put in the concrete when we had the chance.

Again, while I was city administrator, the city received a grant for a community/senior center. The grant barely covered the purchase of a vacant building with a little left over for vinyl flooring and a small kitchen, just to get the center started.  However, the city retained an architectural firm to prepare a “long-range plan” for the building so that we would have a plan for more extensive renovations as soon as funds became available.

The young associate assigned to the project was very enthusiastic and developed a simple but pleasing plan for the building.  He happened to mention that he was in the Naval Reserve using his professional skills in a construction battalion (Seabee) unit, and that sometimes they needed small indoor projects during the winter.  He wasn’t in a position to make a commitment, but suggested I call his commanding officer to find out if the Seabee unit could help with anything on our project.

I followed up as he suggested, and I learned that they were looking for something right then.  All I needed to do was get a release from the appropriate unions that might otherwise have been involved in the project.  This turned out to be surprisingly easy.

The end result was that we were able to get all the wiring, plumbing, and framing (and most of the sheetrock) installed by the Seabees for just the cost of materials.  In the end, we were able to complete the project and provide a much more complete and functional community/senior center than we thought would be possible when we began the project.