Use of Electronic Devices During Council/Commission Meetings 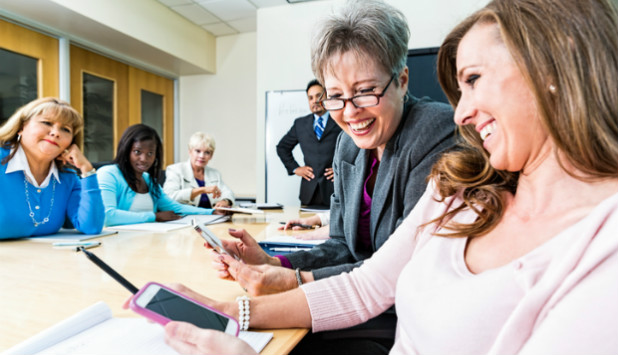 It seems that everybody is always looking at a screen or sending messages these days, sometimes using a smartphone, a notebook computer, or tablet—what’s the big deal?

When councilmembers or commissioners who are participating in an open public meeting get lost in their screens they might be: violating the OPMA; about to get the agency involved in a PRA issue; distracted by the latest game app; or sending messages using social media. Or, quite possibly, the councilmember/commissioner might be very attentive to the discussion or issue at hand and reviewing relevant documents online. Here’s the issue: the other people in the room have no idea whether those looking at their screens are tuned in, tuned out, or violating the law, and that can be a problem.

If people on the legislative body are sending electronic messages between themselves regarding the issue under discussion, then that violates the OPMA because those present have a right to listen to the discussion.

If someone on the legislative body is communicating with people not in the room regarding the issue under discussion, that is certainly rude but might also be violating at least the spirit of the OPMA because their role is to be discussing the issue with their fellow councilmembers/commissioners, not with their social media friends or twitter followers.

If a councilmember or commissioner is sending messages regarding the public issue being discussed, then those messages are public records and can be requested by any member of the public, even if the messages are being typed on a personal smartphone or personally owned computer. Those records might show that the OPMA is being violated or might show that the councilmember or commissioner is involved in totally personal business and is ignoring the matter at hand. For example, A PRA request in one city revealed that a councilmember was involved in a series of very personal and embarrassing emails with a girlfriend.

What Can a Public Agency Do To Avoid Problems?

Adopt a policy. Let all members of the legislative body and the public know the rules. Here are some examples of policies adopted by jurisdictions here in Washington State.

Councilmembers shall avoid accessing any electronic message during Council meetings. Accessing such communication could be construed as receiving public comment without the benefit of having the citizen in person to address their concerns. Likewise, Councilmembers shall avoid browsing the Internet on non-City business during Council meetings in order that Council’s full attention can be given to the topic at hand.

The Burien City Council Meeting Guidelines include this:

And, finally, C-TRAN’s Board of Directors Conduct Policy includes the following:

Board Members shall not send or receive electronic communications concerning any matter pending before Board during a Board Meeting.

Board Members shall not use electronic communication devices to review or access information regarding matters not in consideration before Board during a Board Meeting.

To ensure focus on the discussions during meetings, Board Members should only use the internet during meetings to access Board agenda packet information, board resource documents, including but not limited to Board Policies, C-TRAN Bylaws, Robert’s Rules of Order, or other research relevant to the discussion.

In deference to the Board meeting at hand, Board Members should make every effort to refrain from sending or receiving electronic communication of a personal nature during Board Meetings, though it may sometimes be necessary to send or receive very urgent/emergency family or business communications during meetings.

Does your jurisdiction have a policy regarding use of electronic devices during council or board meetings? Should you have a policy? More and more people are becoming addicted to their online screens and communications, but there is a time and place for everything. If the person chairing the meeting becomes aware that one of the participants is distracted by something off-topic on their device, they should be admonished to get back on track.

Be polite, be lawful, and don’t be the subject of a news item relating to inappropriate use of electronic communications.

If you have questions about use of electronic devices during public meetings, or other local government issues, please use our Ask MRSC form or call us at (206) 625-1300 or (800) 933-6772. If you have comments about this blog post or other topics you would like us to write about, please email me at jdoherty@mrsc.org.

Jim had over 24 years of experience researching and responding to varied legal questions at MRSC. He had special expertise in transmission pipeline planning issues, as well as the issues surrounding medical and recreational marijuana. He is now retired.
VIEW ALL POSTS BY JIM DOHERTY
MoreHide

Are local government agencies required to have a list of PRA exemptions on their website pertaining to public records?