Rarely a day goes by at the office now where I don't use Google Earth. As a planning and urban design consultant working for several communities throughout the Pacific Northwest at any given time, it's an incredible tool to have at your finger tips. When curiosity beckons or specific research information is needed, you only need a few clicks on the mouse and keyboard and voila, you are flying overhead. (Bing Maps are pretty useful too — with their aerial perspective views, which aren't offered on Google Earth.)

And Google Earth's capabilities just keep getting better, as new “goodies” are being added all the time. They include better street-view images, 3D buildings and trees, and historical imagery, which I'll discuss more below.

In this article, I'll share some of the ways in which I've used Google Earth (and Bing Maps) over time. Hopefully there are a couple of useful takeaways.

Simple reconnaissance is the most obvious reason to use Google Earth. We want to investigate what's on the ground. This can be a particular site, street, neighborhood, entire city, or geographic region. I use it to examine development patterns, street design, recent construction, or the context of a particular site or street. While I mostly use it to look at conditions and examples locally, it's just as easy to fly around the globe to examine international places and development examples. Of course, it's best to see places and examples in person. However, there are many places and features that can't be seen from public spaces, including green roofs, internal courtyards, private landscapes, or roadless areas with challenging terrain.

My Ellensburg reconnaissance included a citywide bicycle tour, occasional driving tours, and lots of Google Earth fly-throughs. Here's an aerial of the city for perspective. 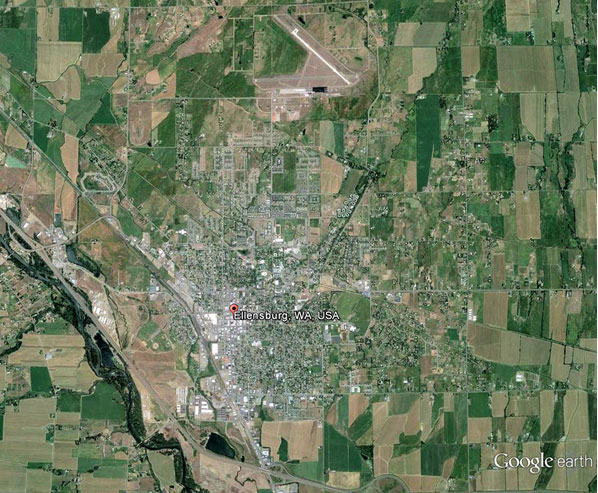 One of the major issues in the code update was to limit sprawl and improve the quality of new development. While the older neighborhoods included tree-lined streets and homes with porches, the newer developments included wide, tree-less streets that were dominated visually by garages and parked cars, and weren't well connected. Working with the City's non-motorized transportation committee, I wanted to explore block patterns within Ellensburg and in other cities — both new and old neighborhoods. The images below were used to help relate the issue to decision-makers, committee members, and project participants and ultimately assist in updating the block size and connectivity standards consistent with community goals (such as creating “healthy communities” and promoting energy efficiency”). 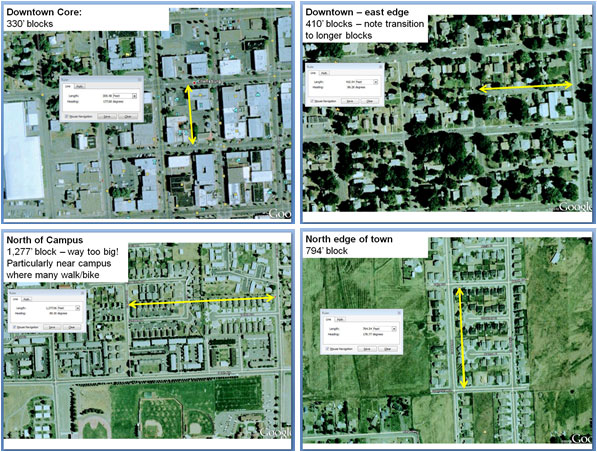 Sample slides used in an Ellensburg community workshop to illustrate the range of block sizes that now exist in the city by using Google Earth's Ruler Tool. The bottom two slides are two of several block layout examples from other cities — using both older and newer development examples. These slides helped participants understand the issue better and were extremely useful in crafting standards for block widths that were both reasonable and helped to meet community access and connectivity goals. (You can access this tool via “Tools” and then “Ruler” in the toolbar. You can measure the distance between two points, measure the distance of a multi-point path, and measure areas, building heights, and widths.)

Since Boise was a 1-1/2 hour flight away, Google Earth was particularly valuable in helping to fill the gaps in our on-the-ground reconnaissance and gaining a better understanding of the citywide context. We used aerials and the street view images combined with Comprehensive Plan goals and policies, staff coordination, and other available information to craft development frontage standards for commercial and mixed-use districts citywide. The aerial and street view images showed us existing street conditions, the presence of on-street parking, the context and condition of current sites and development (and whether or not redevelopment might be possible), the zoning context, and the regional context. This helped us formulate a strategy to determine areas where pedestrian-oriented storefronts might be required or encouraged, areas that might be transitioned to more pedestrian and transit friendly development configurations over time, and areas that warrant a generous amount of flexibility in the location of buildings and vehicular access/parking areas.

) throughout the city in order to determine the right design approach for block frontages (the form of private development along streets). As part of the project, the City sought to make its many commercial arterials more attractive and pedestrian-oriented. The project team saw the property above as a special opportunity as a vibrant neighborhood center — and designated Steelwood Avenue (above right) as a “Storefront” street — whereby future development must integrate storefronts along the sidewalk edge (expanded sidewalks with street trees). See block frontage maps below, from the adopted Boise Citywide Design Guidelines. 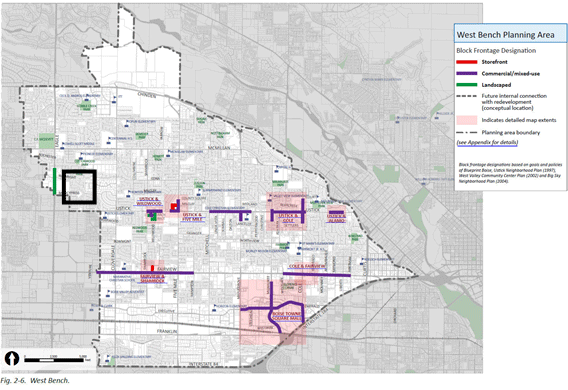 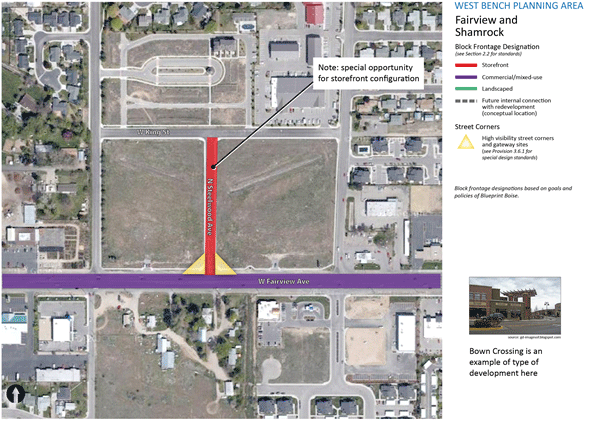 Aerial photos were used for the zoomed in block frontage maps to provide better context for users.

While I live in Bellevue and frequent Downtown several times a week, the aerials and other Google Earth tools have been particularly useful in my firm's work assisting City staff and an advisory committee in the process of updating zoning and design guidelines. Below are some images and tools we've used.

The aerial perspectives using the 3D buildings layer were used in an audit of code to examine how the building height, form, and setback provisions were being implemented around the perimeter of downtown. 3D trees shown here are increasingly becoming available in more areas (via the 3D buildings layer).

I also discovered the Historic Imagery Tool — which is a fun tool to see how areas have evolved over time. These were used in auditing the existing code. Note the historic imagery icon (circled in yellow) and the History Bar just below it where you can slide to the left back in time (usually goes back to about 1990 at this point in many areas). The view is the office core of downtown. The obvious takeaway is that buildings and plaza/green spaces have replaced large surface parking lots over time.

And — Bing Maps offer a unique bird's eye perspective in addition to the standards aerial photos — and thus useful in providing greater context and a perspective on building heights and shade/shadow patterns.

Planners, urban designers, architects, and others can use Google Earth terrain within SketchUp to develop geo-referenced models (How to link). The 3D buildings can then be placed into Google Earth for public or private display. This allows one to view real or prospective projects from any vantage point for context. Below are two examples. 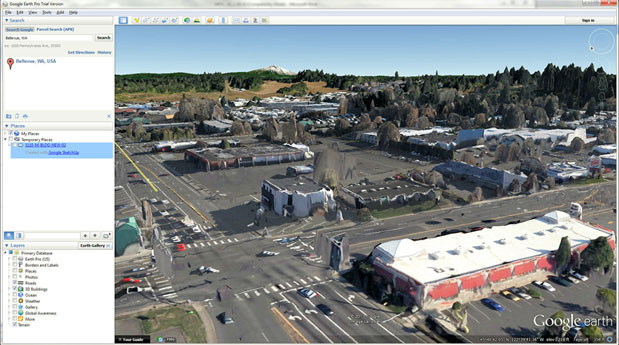 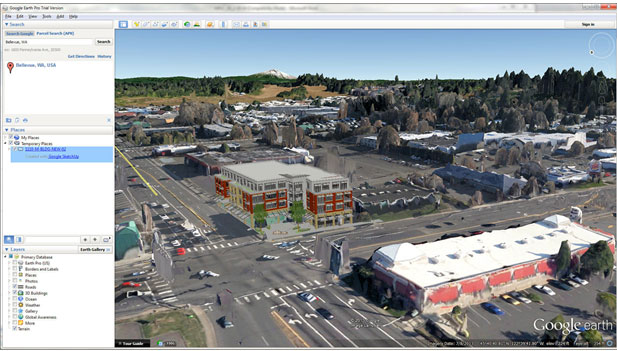 Google Earth and Google SketchUp Inter-operability. We were asked to illustrate how new mixed-use development could look at a key intersection within the Clark County's (WA) Highway 99 corridor. The top image shows existing conditions.

Cities can use these tools to examine the impacts of various building height and form options. These images show Seattle's University District under current conditions (left) and with new buildings under various increased height limits (right). The detailed “future” buildings shown in the right image were simply “copied” from elsewhere on Google Earth (perhaps even from another city) and placed on the site, while the simple box forms were created in Google Sketchup. These types of images are increasingly used as a great tool in the environmental review process and for community outreach in understanding the visual implications of various options.

Conclusions and Other Helpful Resources

It's a great resource — use it! Below are some other resources that may be helpful.

A special thanks to Rachel Miller, Sean McCormick, and Jenny Farmer (all from Makers) and Mickey Mellen (Google Earth Blog) for reviewing and contributing to this article.

Bob Bengford writes for MRSC as a guest author.

How Well Do You Walk this Meeting Tightrope?