This page provides a general overview of the Washington State Open Public Meetings Act (OPMA) as applied to local government agencies, including checklists and tips created in collaboration with the State Auditor’s Office Center for Government Innovation.

It is part of MRSC's series on the Open Public Meetings Act.

OPMA legislation and proclamations: There are several new changes related to the Open Public Meetings Act taking effect in 2022:

We will be updating our website soon to reflect these changes.

The Washington Open Public Meetings Act (OPMA), codified in chapter 42.30 RCW, requires that all meetings of governing bodies of public agencies, including cities, counties, and special purpose districts, be open to the public.

The OPMA contains specific provisions regarding regular and special meetings, executive sessions, the types of notice that must be given for meetings, the conduct of meetings, and the penalties and remedies for violations.

What Is a "Meeting"?

A "meeting" under the OPMA occurs when a quorum of a city council, board of county commissioners, or other governing body (including certain kinds of committees) gathers with the collective intent of transacting the governing body's business. In order to be valid, ordinances, resolutions, rules, regulations, orders, and directives must be adopted at meetings conducted in compliance with the OPMA.

Meetings do not have to be in person to be subject to the OPMA. Meetings can occur by telephone, email, or other electronic media.

Who Is Required to Comply?

The following local government bodies are required to comply with the OPMA:

Any member of a governing body who attends a meeting knowing that it violates the OPMA is subject to a potential personal liability of $500 for the first violation and $1,000 for a subsequent one. See RCW 42.30.120(1)(2).

Any person who prevails against an agency in any action in the courts for a violation of the OPMA will be awarded all costs, including attorney fees, incurred in connection with such legal action. See RCW 42.30.120(2).

All members of governing bodies must complete OPMA training within 90 days of taking the oath of office or assuming duties (RCW 42.30.205). A refresher OPMA training is also required every four years. For more information, see the Washington State Attorney General's webpage on Open Government Training.

MRSC and the Association of Washington Cities (AWC) have created an OPMA online course to help mayors and councilmembers fulfill these training requirements.

Basic Procedural Requirements for All Meetings

The OPMA establishes some basic procedural requirements that apply to all meetings, whether they are regular or special meetings. 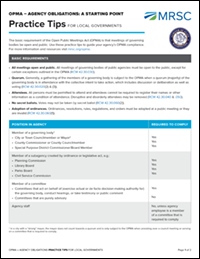 Agency Obligations: A Starting Point. Use these practice tips to guide your agency's OPMA compliance. Re-designed and revised with minor clarifications in May 2021.

To ensure that agency deliberations and other actions are conducted and taken openly, agencies are required under the OPMA to provide sufficient public notice of meetings of their governing bodies. 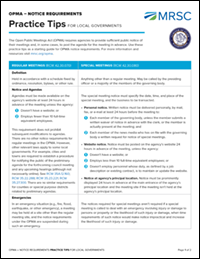 Notice Requirements. Use these practice tips as a starting guide for OPMA notice requirements for both regular and special meetings. Re-designed and revised with minor clarifications in May 2021.

Use the following notification checklist to ensure that your agency provides the required notice for special meetings. This sample is written for cities but the wording can be easily modified for counties and special purpose districts.

Members of a governing body may also meet in executive session during an open public meeting, but only for one of the reasons specified in and in accordance with the procedures identified in RCW 42.30.110. For further information on executive sessions, see:

Electronic communications by members of a local government’s governing body can implicate the OPMA. 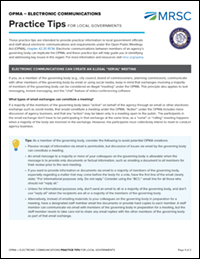 Electronic Communications Practice Tips. Use these practice tips to guide your agency’s OPMA compliance in the context of electronic communications. Re-designed and revised with minor clarifications in May 2021.

Can a conversation between an employee and a commissioner be recorded outside of a public meeting without advising the other person?

After a recorded public meeting, is there a requirement for how quickly we need to make the recording available to the public? And for how long must we make it available online?