This page provides a brief overview of accessory dwelling units for cities and counties in Washington State, including legal requirements and examples of city and county codes.

What is an Accessory Dwelling Unit?

An accessory dwelling unit (ADU) is a small, self-contained residential unit located on the same lot as an existing single-family home.

An ADU has all the basic facilities needed for day-to-day living independent of the main home, such as a kitchen, sleeping area, and a bathroom. As the term "accessory" implies, ADUs are generally defined to be smaller in size and prominence than the main residence on the lot. Some definitions include specific size limits, and a location that is not readily visible from the street.

ADUs are sometimes called "mother-in-law apartments" or "granny flats," because they are often used to house extended family. Other codes use terms such as "accessory apartment," "accessory living unit," or "secondary unit," to have a similar meaning. 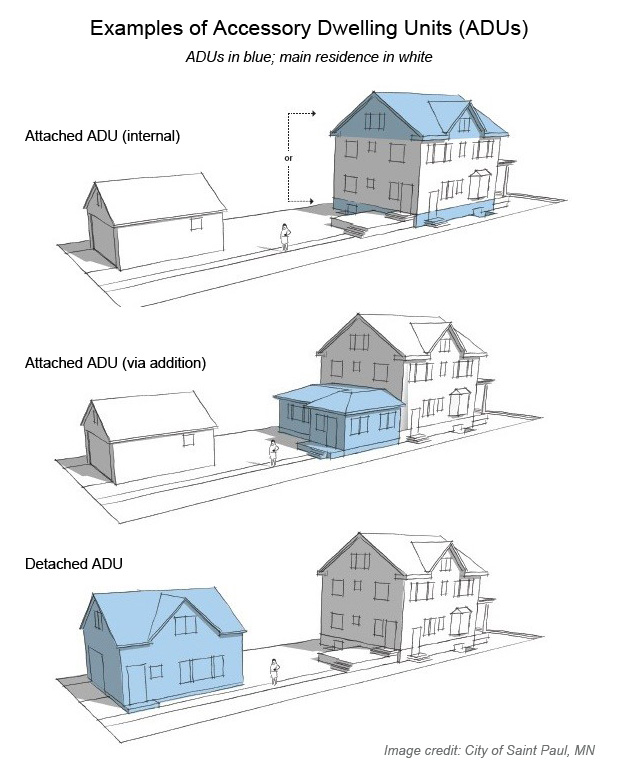 RCW 43.63A.215 and RCW 36.70A.400, adopted as part of the 1993 Washington Housing Policy Act, require many Washington cities and counties to adopt ordinances encouraging the development of accessory apartments or ADUs in single-family zones. Specifically, this legislation applies to:

Other communities may choose to allow ADUs if so desired.

ADU ordinances have been widely adopted in Washington since the 1993 Act, in part because ADUs have helped local jurisdictions meet GMA goals to encourage affordable housing and provide a variety of housing densities and types while preserving the character of single-family neighborhoods.

The table below provides examples of accessory dwelling unit codes adopted by cities and counties in Washington State, including a basic comparison of their provisions. (Click on the image to see a larger version.)

Most of these examples allow for both attached ADUs (sometimes called AADUs) and detached ADUs (sometimes called DADUs). With the exception of Vancouver, each requires that one of the units be occupied by the owner of the property. Many of the provisions limit the size of the accessory unit, ranging from 600 to 1,000 square feet. Some also limit the size of the accessory unit relative to the primary unit, ranging from 40 to 75 percent of the area of the primary unit.

Almost all of the code provisions rely on the development regulations of the underlying zones. Several provide maximum heights, onsite-parking, setbacks and other requirements specific to ADUs. Additionally, many of code provisions require the ADU to be similar in design to the primary unit (which may or may not be desirable, depending upon the design of the primary residence).

Click on the table below to view a summary analysis of selected ADU provisions from cities in Washington State, including links to the actual code provisions. 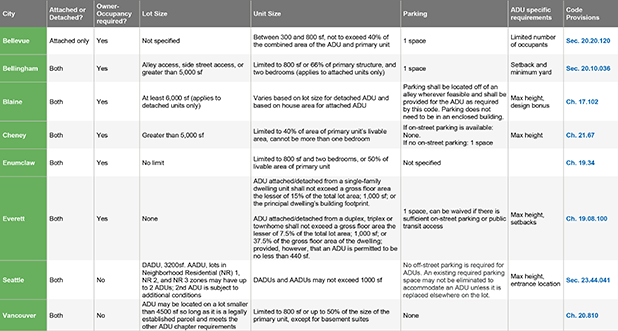 A few Washington State cities have or are re-examining some of the standards listed above to determine if they are acting as barriers to the construction of new ADUs.  As may be seen in the out-of-state examples above, some cities such as Portland (OR), Santa Cruz (CA), and Vancouver (BC) have changed some of their requirements, such as eliminating owner occupancy, in order to encourage the production of more ADUs. In addition to the examples of Seattle and Vancouver (WA), cities such as Ferndale (Ch. 18.34) and Yakima (Sec. 15.09.045) do not require owner occupancy. Another innovative approach is Seattle’s program to streamline its ADU permitting process by providing pre-approved ADU plans. Some cities, such as the City of Port Angeles, are addressing cost barriers by eliminating requirements for ADUs to have separate utility connections and, instead, allowing ADUs to be connected to the primary dwelling unit for sewer and water services (see Port Angeles City Council Memo). Other cities, such as Spokane, have eliminated minimum lot size requirements and expanded the maximum ADU size permitted (see Spokane City Council Agenda Item).
The preliminary results appear to show that the reduced zoning requirements have resulted in more ADUs in these cities. For example, since adopting its ADU program in 2009, Vancouver (BC) has permitted over 3,000 ADUs and has set the target of adding another 4,000 by 2028. Recent regulatory reform, fee waivers, and public education efforts in Portland have contributed to the doubling of the number of annual ADUs permits, from under 300 in 2014 to an average of over 600 per year from 2016-2018 (see AccessoryDwellings.org)

Homeowners seeking to develop an ADU on their property face several financial hurdles, such as impact fees, permitting fees, utility connection costs, and increased property taxes in addition to labor and materials costs associated with the actual construction of an ADU. Some local governments are seeking to directly reduce cost-burdens and incentivize ADU development.   For example, cities such as Spokane (Sec. 08.02.031) and Port Angeles (see Port Angeles City Council Memo), are temporarily waving building permit and other fees associated with ADU construction. Another approach to reducing costs is Spokane’s policy providing property tax exemptions for newly constructed ADUs.
Outside of Washington State, other local governments are also experimenting with incentives for ADU construction. For example, Portland (OR) waives “system development charges” (i.e., impact fees) for proposed ADUs with a 10-year commitment from the property owner that the ADU will be used as long-term housing (as opposed to use as a short-term rental). Portland also provides an ADU Financing Guide that identifies local financial institutions with programs that can be used to fund ADU construction. Other local governments, such as Marin County (CA), will waive permit fees between $2,500 and $10,000 based on the rates at which the ADU will be rented, ranging from market-rate to at or below 80% area median income.

Short-Term Rental of ADUs and Enforcement

In recent years, ADUs have been increasingly used as short-term rentals (STRs) on online platforms such as Airbnb and VRBO. This use of ADUs (and other types of would-be affordable housing) has a negative impact on the affordable housing supply in cities (see MRSC blog post on Affordable Housing and the Impact of Short-Term Rentals). Some cities, such as Bellingham (Sec. 20.10.03) and Poulsbo (Sec. 18.70.070), do not permit the use of ADUs as STRs. Others, such as Langley (Ch. 5.40), limit the amount of STR permits approved for ADUs.
Enforcing these STR regulations is challenging--it is very difficult for cities to determine how many or which ADUs are being offered as STRs on online rental platforms. As such, technology is playing a growing role in local enforcement of STR rules. Many cities across the U.S., including Madison (WI) and Charleston (SC), are starting to use 3rd party technology companies to monitor and report on STRs. Portland (OR) is in the process of developing its own data analyzing and enforcement software. Some large cities, such as Seattle and Los Angeles (CA), have had the benefit of collaborating with Airbnb on enforcement (see Los Angeles Magazine article). Despite these techniques, the enforcement of STR regulations remains a significant challenge for local governments of all sizes.

Can you provide examples of jurisdictions that allow more than one accessory dwelling unit (ADU) on a lot?