Rights and Limits on Filming in Public Facilities

August 23, 2019  by  Aidan Mathis Category:  Court Decisions and AGO Opinions

“First Amendment audits” are an alarming recent phenomenon that has been occurring in local government agencies across Washington and the country. These “audits” typically involve private citizens videotaping or otherwise recording an interaction with their local government — such as the police or another official in performing his or her duties or the day-to-day activities inside city hall or another government building.

These “auditors” are intentionally pushing the boundaries of their First Amendment rights to see whether the city responds in a way that is consistent with what the auditors believe their rights to be. These auditors may be belligerent or confrontational, sometimes attempting to induce a violation of their rights, which can then serve as the basis of a legal claim against the local government.

This blog post will explore what the rights of these auditors truly are, and how local government agencies can respond if they encounter one.

What Rights Do the Public Have to Film?

Members of the public do have broad rights to film interactions with local government officials and police officers in Washington State. While under RCW 9.73.030 it is a crime to record any private conversation without first obtaining the consent of all parties engaged in it, the courts have repeatedly held that this law does not apply to public conversations between citizens and police officers.

The Ninth Circuit Federal Court of Appeals first acknowledged the First Amendment right of citizens to film police officers carrying out their duties in public in the case Fordyce v. City of Seattle, 55 F.3d 436 (1995). Later, in Lewis v. State, Dept. of Licensing, 157 Wash.2d 446 (2006), the Washington State Supreme Court also ruled in favor of recording public police activity in the context of a traffic stop. The Court held that there was no reasonable expectation of privacy in a brief, official business conversation between an officer and a driver on a public highway, making RCW 9.73.030 inapplicable to the situation.

In addition, citizens lawfully present at the scene of police activity may express verbal criticism—even profane and abusive criticism—towards police officers carrying out their duties so long as the citizens do not physically touch the officers or issue threatening statements or movements. See State v. E.J.J., 183 Wash. 2d 497 (2015). Thus, members of the public do have a right to record the police in the public performance of their duties, even when the recording involves abusive language being directed towards the officers.

This right also likely extends to recordings of other government officials in public spaces, such as city hall. While there has not been a case explicitly granting such a right, the reasoning behind Lewis v. State, Dept. of Licensing should apply to other public employees as well. As with the traffic stop in Lewis, there is likely no reasonable expectation of privacy for a conversation between a government official and a citizen in places that are open to the public. The State Attorney General has also opined that citizens have a right to record open public meetings, such as a city council meeting, giving some additional support to the notion that citizens have a right to record their government’s public conduct. Therefore, citizens likely do have the right to record any government business that occurs in areas open to public examination.

What Can Cities Do?

Although citizens have broad rights to record their government, there are limits that can be imposed.

If the behavior of an auditor interferes with the operation of government or the ability of other members of the public to use a public facility, an auditor may be removed from public property they would otherwise be entitled to be in. See State v. Blair, 65 Wash. App. 64 (1992).

Note that such a disruption would have to consist of more than the mere act of recording. In order to be lawfully removed the auditor’s actions must make it impossible for city business to continue in an orderly fashion. Profane or abusive language doesn’t create a sufficient disruption by itself, either—only if such language qualifies as a physical threat or “fighting words” (words that inflict injury themselves or tend to incite an immediate breach of the peace) or if the act (not just the content) of speaking itself  disrupts city business, is there cause for members of the public to be removed.

The local government entity can also act to prevent filming in areas of its facilities that are not open to the public. Auditor access to such areas would constitute trespassing, and any conversations recorded would be private for the purposes of RCW 9.73.030.

Ultimately, if an auditor doesn’t run afoul of these boundaries, the best advice for local government staff and elected officials is to ignore the auditors and not engage with them except to conduct business. Otherwise, a confrontation with an auditor may lead to a public allegation of a “violation” of their constitutional rights, both in the press and online, and perhaps even to a court challenge that the jurisdiction has attempted to violate the public’s constitutional rights. 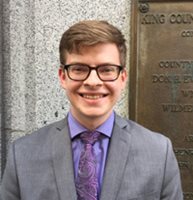 Aidan interned at MRSC between his second and third years of law school in 2019 while attending the University of Washington School of Law. He authored this article during his internship.

During law school he focused on local Washington State issues. In addition to MRSC, Aidan externed with Judge Catherine Shaffer at King County Superior Court. A native of Anacortes, Washington, Aidan also earned a Bachelor’s Degree in Philosophy from the University of Washington in 2016 prior to entering law school.