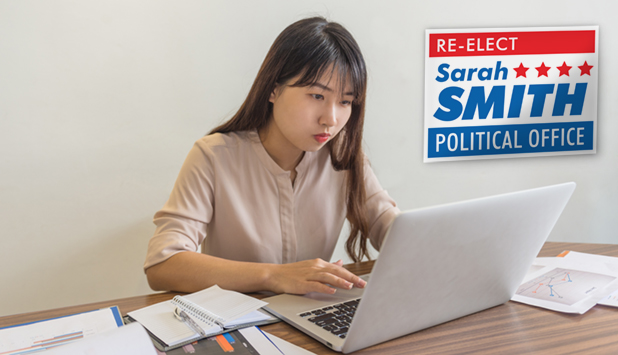 Election season snuck up on us while we were beginning to deal with the COVID-19 pandemic. Now local government employees and elected officials are working in the office and from home, which adds a twist to complying with the rules related to campaigns. This blog post will recap some of our previous advice, with a focus on what might have changed because of the pandemic.

We’ve Been Here Before!

As a refresher, take a quick look at our previous blog posts:

When in doubt, ask the experts

The Public Disclosure Commission (PDC) is the ultimate authority on campaign finance and rules. PDC information includes manuals, financial disclosure, forms, candidate instructions, guidelines, and interpretations. PDC Interpretation 04-02 (most recently updated in 2013) is the go-to reference about what government resources can and cannot be used for campaign purposes. The Secretary of State also offers online resources.

RCW 42.17A.555 prohibits the use of public office or public facilities to directly or indirectly support a campaign for election or any ballot proposition. This law provides several exceptions, including when:

What is a public facility or resource when employees are working remotely?

Our regular readers probably remember that the restriction on use of public facilities and resources applies to personnel, equipment, and supplies. MRSC’s Use of Public Facilities in Election Campaigns page is our launch point for looking at this issue. But many local governments have provided agency equipment to their officials and employees to use at home. Some local governments may be paying or reimbursing officials and employees for phone or internet service. Does this change the rules?

Agency equipment is agency equipment and should never be used for campaign purposes. However, many agencies have policies in place that allow for use of city phones or computers for personal use if that use does not cost the agency any extra money (which is known as “de minimis” use). MRSC believes that the prohibition on use of public facilities and resources for campaign purposes would prohibit the use of agency-funded equipment even if the agency has a policy allowing “de minimis” use of agency equipment. If your local government has a de minimis use-like policy, you should make sure your employees and elected officials understand that the prohibition on use of agency equipment for campaign purposes still applies. For things like phone or internet service — items that are not exclusively owned by the agency — your policy may need to more clearly separate “work” time from “break” time, especially for your FLSA-exempt employees who may be working non-standard hours.

You cannot use public funds to challenge a proposed ballot initiative. See Limits on Pre-Election Litigation Involving Local Ballot Initiatives for more details on this question.

Also, we recommend that elected officials and employees who make statements supporting or opposing ballot initiatives or candidates, regardless of the media used (e.g., social media, speeches at campaign rallies, letters to the editor, etc.), always make it clear that they are not expressing the view of the public agency or elected body, but merely their own opinion: “My personal view is….”

What about campaign buttons or signs?

How should a local government handle it when employees or elected officials display campaign buttons or signs? That depends on your agency’s rules. PDC Interpretation No. 92-01 says that wearing buttons at work is not a use of facilities, but it suggests that agencies urge their officials to be careful that doing so does not lead to other activities that will violate the statute. For example, wearing a button may draw the agency’s personnel into a political discussion with a customer or coworker during office hours (and not during a break). Also, unless agency policy prohibits it, displaying campaign items at a person’s work desk is probably allowed unless the area is visible to the public.

The twist with telework is that campaign items are now located in a person’s home and home office. However, the principal remains the same — Local government officials and employees should not engage in campaign activities using public resources and should avoid activities that imply the agency has taken a position in the campaign (unless of course the governing body has adopted an official position). So, update your policies, if necessary, to talk about displaying campaign-related materials while on a work-related video call.

A state or municipal elected official may not speak or appear in a public service announcement (PSA) that is broadcast, shown, or distributed during the period from January 1 through the general election in a year the official is also candidate for office (see RCW 42.17A.575 and consult with your agency attorney regarding any exceptions).

Candidate or campaign use of a local government’s meeting rooms

May a local government allow a campaign or candidate to use its meeting rooms? The PDC advises that:

While public gatherings are still prohibited or limited, the statute would appear to allow an agency to host a “virtual” neutral forum using the agency’s video-conferencing system.

Steve Gross joined MRSC as a Legal Consultant in January 2020.

Can the city council adopt a medical freedom ordinance contrary to the state vaccine and mask orders?