Zoning for Marijuana – What Are Jurisdictions Doing and How Is It Working? 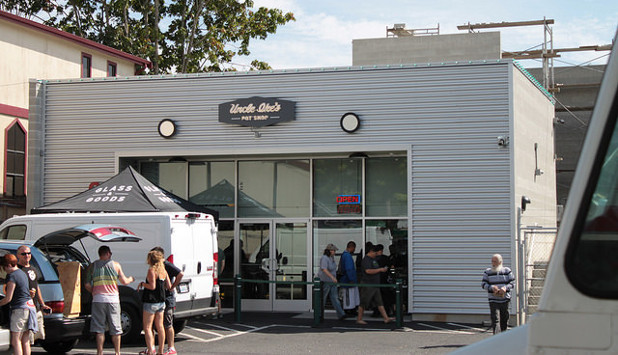 A recreational marijuana shop in Seattle. Image courtesy of SounderBruce.

Cities and counties have the authority to zone for licensed marijuana businesses as they deem appropriate, subject to the 1,000-foot buffer zones around certain uses established in RCW 69.50.331(8)(a), which cities and counties now may reduce in size, except for those around schools and parks. See RCW 69.50.331(8)(b). They may even prohibit such businesses entirely, at least according to the attorney general’s office and the five superior courts that have so far addressed the issue. So, how have cities and counties approached their authority to zone for this new land use?

Most jurisdictions that allow indoor marijuana production in warehouse-type structures have limited them to industrial zones. Jurisdictions that allow outdoor marijuana production generally limit growing to larger agricultural parcels. Some urban jurisdictions have chosen to allow all marijuana businesses only in industrial or light industrial zones – to keep them tucked away where they will be less obvious or controversial. Additionally, some cities require a conditional use permit process and impose conditions concerning issues such as odors emanating from the property.

A number of jurisdictions have enacted regulations establishing a designated distance between retail stores, to avoid having them clustered together. But, as noted directly above, some jurisdictions do the opposite, requiring all marijuana businesses to be sited in industrial or light industrial zones, potentially resulting in clustering of producers, processors, and retailers.

Predictably, there have been conflicts concerning the locations of marijuana uses. Some people and groups have expressed displeasure at having a licensed marijuana business move in next door. For instance, one of the first retail marijuana stores to open in Seattle was “Uncle Ike’s Pot Shop,” and it is now the state’s top-selling store. It is located in the city’s Central District next to the Mount Calvary Christian Center. The church initially filed a lawsuit in protest, but later dropped it, and the pot shop and the community around it are still trying to coexist. Snohomish County officials got significant input from people upset when licensed marijuana growers moved into their semi-rural neighborhood, and the county subsequently amended its zoning to prohibit licensed marijuana production in the R-5 zone. And Chelan County has allowed marijuana uses but recently adopted a moratorium to give it time to address impacts it hadn’t previously considered, such as odor. The county is even considering now banning marijuana growing and processing, but not retail stores.

Jim had over 24 years of experience researching and responding to varied legal questions at MRSC. He had special expertise in transmission pipeline planning issues, as well as the issues surrounding medical and recreational marijuana. He is now retired.
VIEW ALL POSTS BY JIM DOHERTY
MoreHide

Should Pasco allow marijuana shops? A cannabis store owner has the city reconsidering

Our city initially banned cannabis sales when it was legalized in WA State. My understanding is that means we cannot receive any tax revenue from cannabis sales. If our city lifted the ban, would we be eligible to receive revenue from state sales, even if we did NOT have a cannabis business in our city?

Cannabis in the Workplace FAQs