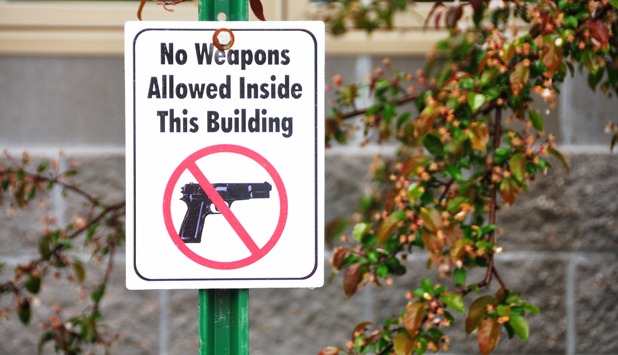 In the wake of the latest mass shooting at a high school in Parkland, Florida, many citizens and elected officials are asking what their local governments can do to prevent such tragedies in the future. While there is no easy solution, some feel that stronger gun control measures would help.

Washington State has largely preempted the field of firearms regulation and there are constitutional limits on how guns may be regulated. City and county governments do, however, have some ability to enact policies locally.

This blog post will provide an overview of the parameters of state preemption of firearms regulation, as well as set forth some known options available to local governments.

The state has placed significant restrictions on the ability of local government to adopt regulations that place greater restrictions than state law related to firearms. RCW 9.41.290 provides:

The state of Washington hereby fully occupies and preempts the entire field of firearms regulation within the boundaries of the state, including the registration, licensing, possession, purchase, sale, acquisition, transfer, discharge, and transportation of firearms, or any other element relating to firearms or parts thereof, including ammunition and reloader components. Cities, towns, and counties or other municipalities may enact only those laws and ordinances relating to firearms that are specifically authorized by state law, as in RCW 9.41.300, and are consistent with this chapter. Such local ordinances shall have the same penalty as provided for by state law. Local laws and ordinances that are inconsistent with, more restrictive than, or exceed the requirements of state law shall not be enacted and are preempted and repealed, regardless of the nature of the code, charter, or home rule status of such city, town, county, or municipality.

Under state law, possession of firearms is prohibited in several types of places, including jail facilities, court facilities, schools, mental health facilities, secure portions of airports, the areas of restaurants and bars that are off-limits to individuals under the age of 21, and outdoor music festivals (see RCW 9.41.300(1) and RCW 70.108.150). However, state law does not prohibit possession of firearms in libraries, hospitals, parks, and other public facilities not listed in RCW 9.41.300(1).

Pursuant to the state preemption statute, a local government has express authority to enact laws and ordinances:

Local governments also have express authority to enact zoning laws that apply to, but do not single out, gun businesses.

On March 21, Seattle Mayor Jenny Durkan and Councilmember M. Lorena Gonzalez announced a plan to propose legislation that would require gun owners to lock up firearms in their homes and vehicles. The mayor, acknowledging a likely challenge on the state preemption issue, stated: “This is not an anti-gun measure. This is a gun-safety measure.” The city attorney intends to work with the mayor and council to defend any lawsuit. Seattle already requires gun owners to report lost or stolen firearms within 24 hours.

Washington courts have reviewed certain local actions and regulations relating to firearms. The following are some key holdings.

Cherry v. Municipality of Metro. Seattle, 116 Wn.2d 794. RCW 9.41.290 does not preempt the authority of a municipal employer to regulate or prohibit employees’ possession of firearms while on the job or in the workplace.

Chan v. City of Seattle, 164 Wn. App. 549 (2011): A City of Seattle regulation restricting the possession of firearms in various types of park facilities was struck down by the Washington Court of Appeals.

Pacific Northwest Shooting Park Ass’n v. City of Sequim, 158 Wn. 2d. 342 (2006): Sequim’s decision to impose conditions on a permit for private use of city convention center for a gun show was upheld. In this case, the court determined that preemption did not apply because the city acted in a proprietary capacity (i.e., as a property owner).

Local governments have the authority to destroy judicially forfeited and unclaimed firearms, with some limited exceptions. These include firearms seized during an arrest, those that are illegally possessed, or those that may have been turned in to law enforcement and remain unclaimed by their owners. RCW 9.41.098 provides, in relevant part:

Some cities have adopted policies and ordinances directing the destruction of such firearms. Here are some code examples that either mandate or include the option of destroying the firearms.

A side note: Unlike the discretion given to local governments, state law prohibits the Washington State Patrol from destroying forfeited firearms unless they are illegal firearms. Instead, the agency must resell the vast majority of them. A bill was reintroduced in the legislature this year to give the state patrol the option to destroy forfeited firearms; however, the bill failed to pass (see HB 1483 and this article on forfeited weapons).

While local governments are constrained in many ways by state law and the constitution, there are some actions they may take related to firearms. If you are aware of other policy options available to cities and counties, please contact me at jdvorkin@mrsc.org or share this information in the comment section below.

What Can Local Governments Do About Drones

Does HB 1630 — the new law prohibiting open carry of firearms and other weapons within certain municipal buildings — apply to special purpose districts like fire, hospital or port districts?