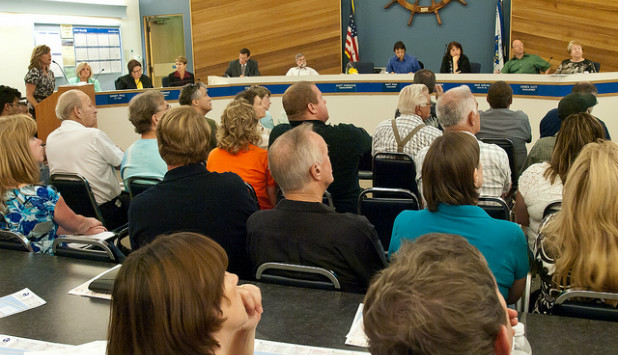 Can you be a legislator and a judge at the same time?

Any high school civics student can correctly answer this question with respect to the federal and state governments. The answer is an unequivocal “no” because of the separation of powers doctrine - one of the key principles contained in both the federal and state constitutions. The response to this issue at the local government level, however, has historically been different, particularly with respect to the land use permit review process.

People are elected to Congress or the Washington State Legislature to be lawmakers. They make the law by adopting legislation. The administration and enforcement of laws adopted by those legislators is the responsibility of the executive branch. The judicial branch of government plays a very different role - it applies the meaning of the law to cases brought before it.

Adjudication requires reviewing evidence and arguments and applying the law to the facts of the case to determine the outcome. In contrast to the legislative and executive branches, which are unquestionably political bodies, the judicial branch at both the federal and state level was designed to be apolitical – rendering judgments based on facts and law, not on popular opinion or campaign promises.

This “separation of powers” has been less absolute at the local government level in Washington. Since statehood, local governments have mirrored the distinct roles and functions of the legislative branch (e.g., city, town, and county councils) and the executive branch (e.g., elected mayors). However, until the 1970’s, councils in all Washington cities also played a “quasi-judicial” role with respect to certain land use permits. They were responsible not only for adopting local zoning laws, but sitting in judgment on appeals when zoning permits were approved or denied by an administrator, a board of adjustment, or a hearing examiner. Any party dissatisfied with the council’s decision on such appeals may appeal to superior court. A superior or appellate court may overturn a council’s decision, but significantly, depending on the circumstances, may also impose financial judgments against the city.

Since the 1970s, many counties and cities have moved away from the “quasi-judicial” role. This movement began with the adoption by local governments of the hearing examiner system to conduct public hearings on many quasi-judicial land use permits, building a record, and adopting conclusions of law to support the decision. Hearing examiners are hired because of their background in land use law and most are lawyers. Their professional training enables them to avoid procedural or other errors that would undermine the legal sufficiency of the permit review and decision. As non-elected officials, hearing examiners are insulated from political pressures and are relied upon to render objective and impartial decisions.

Many cities in the state now use hearing examiners to conduct at least some quasi-judicial public hearings. While council action is required on rezones, the law gives councils the option to assign to their hearing examiners authority to make final decisions on other types of quasi-judicial permits. Examples of such permits are conditional use permits, variances, planned unit developments, design review approvals, site plan approvals, and short subdivisions.

Over the past decade, many city councils have removed themselves from final approvals and appeals of these types of quasi-judicial decisions, delegating that responsibility to their hearing examiners. This means that any appeals of a hearing examiner’s decision are taken directly to superior court rather than to the council. Why have those cities, including Covington, Kirkland, Mercer Island, Shoreline, and Edmonds, taken this step? Why should your council consider following their lead? There are many reasons, but here are the top three:

1. One major concern is the financial risk of having lay elected officials with no training or background in the law attempting to, in effect, practice law. That is why the Washington Cities Insurance Authority, the risk pool for many cities in the state, strongly encourages councils to divest themselves as much as possible of the quasi-judicial role. There are a number of procedural pitfalls that could expose the city treasury to multi-million dollar judgments. Even the most intelligent, best-intentioned, and detail-oriented people make mistakes. The risk of such mistakes is amplified at least seven-fold when seven non-legally trained council members are involved, rather than a single legally-trained hearing examiner.

When sitting as a quasi-judicial body, some city councils conduct not only the hearing but also their deliberations in open session. Some do so in an effort to make the process more transparent, but this practice also increases the surface area for a procedural misstep to occur. A too frequent error is allowing a member of the public to make comment outside the record, after it is closed. Sometimes council members feel compelled to make off-the-cuff remarks in an attempt to mollify unhappy citizens, a practice which is fraught with risk. A hearing examiner listens to public comments at the hearing and may ask questions of clarification, but her/his deliberation is an internal mental process – it occurs after the hearing is over, not while it is still in session.

2.  Quasi-judicial cases can be extremely time intensive. The record and written and oral argument can consume many hours of time to be sufficiently reviewed, debated, and discussed. This is typical even for project permits that are fairly small in scope, such as a four-lot short plat or a variance for an individual house.   City councils have many demands on their agenda time including issues with far greater impact on the well-being of the entire community.

Only the elected council can adopt city budgets, ordinances and programs, and provide overall policy direction to the many functions of the city organization.   They cannot delegate those responsibilities to others. With the exception of rezones, councils can delegate the quasi-judicial role.

3.  The quasi-judicial role frequently places city council members in an untenable lose-lose predicament. Elected officials can be caught between the need to be responsive to the desires of their constituents and their duty to be responsible to the clear legal criteria governing the permit decision before them. For example, elected officials involved in a quasi-judicial hearing may not engage in “ex parte” discussions with community members about the pros and cons of that case, which can be frustrating for both parties. Doing the right thing by the legal criteria for a decision may result in a political cost at the next election, while departing from the legal framework in order to satisfy constituents runs the risk of a potentially catastrophic hit on the city treasury.

The reasons for councils to remove themselves from the quasi-judicial role are many and compelling. This does not mean that they can no longer be responsive to the needs of their communities and citizens. Indeed, it should be remembered that every quasi-judicial decision is governed by the applicable land use policies and code standards that are adopted by – the city council!

To that end, a council’s time and attention to land use matters is best invested in adopting clear and effective policies and codes that govern all permits, including quasi-judicial ones. Several cities also require an annual report from their staff and hearing examiners summarizing the nature, frequency, and disposition of quasi-judicial permits. Such ongoing monitoring enables them to identify land use policies or standards that should potentially be revised. By playing this legislative role, a role for which they are uniquely suited and which only they can play, a city council can more effectively provide needed direction to the development of their community without exposing the city to needless financial risk.

Joseph W. Tovar writes for MRSC as a guest author.

Joseph W. Tovar, FAICP, helps communities create visions of their preferred futures, and how to implement them through plans, codes, projects, strategies and organizational training. He has served as planning director for the cities of Shoreline, Kirkland and Covington and as Chair of the Growth Management Hearings Board. In private practice, Mr. Tovar has provided consultant services to private clients, including Washington counties and cities, as well as the Association of Washington Cities. He is a Fellow of the American Institute of Certified Planners and an Affiliate Associate Professor at the University of Washington.