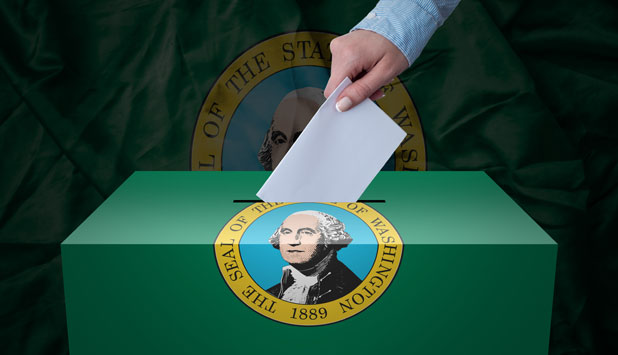 Four times a year, I update MRSC’s Local Ballot Measure Database with the results of all local ballot propositions (except school districts) across Washington State. By far the busiest season is after the November elections, and this year is no exception.

There were 116 ballot measures across the state, and the results were certified on November 29. According to my unofficial tally, 84 passed (72%) while 32 failed (28%). I can’t write about all the ballot measures, but here are some that caught my eye, along with links to local news articles where possible.

City bond measures fared poorly in this election. Even under the best of circumstances, bonds can be tricky, requiring at least 60% approval and 40% turnout (“validation”) compared to the last general election.

In Prosser, just 14% of voters supported a bond measure to replace the police station and city hall, which the city determined were too small and which were then badly damaged by fire and had to be vacated. The city is currently operating out of a former county planning annex.

Ocean Shores voters also rejected a bond to build a new police station. The current station was built in 1990 as a temporary structure, and since then the city’s population has tripled and police staffing has grown significantly grown. Just 42% of voters supported the bond.

In Selah, a bond measure to construct a new Law and Justice Center to house the police department, municipal court, and council meeting chambers received almost 52% of the vote but fell short of the 60% threshold. The police department currently operates out of a rented building that lacks adequate facilities and has traffic issues that make police response more difficult during rush hour.

On the bright side, Oak Harbor voters supported two separate measures to establish a second fire station. The first was a bond measure to construct the facility and purchase a ladder truck, while the second was a levy lid lift to cover the station’s operating expenses.

In Clyde Hill, voters rejected a proposal to adopt the council-manager form of government.

In Whatcom County, voters approved a levy lid lift for early learning and childcare programs by the narrowest of margins — the ballot measure won by a mere 20 votes out of more than 108,000 cast! The ballot measure trailed in every count until the final day. Supporters credited a robust volunteer effort in the weeks leading up to certification, during which they contacted several hundred voters whose ballots were rejected due to missing or inadequate signatures and educated them on how to fix the problems and have their votes counted. This is a useful reminder that every vote matters — especially in local elections!

In Thurston County, voters approved an increase in the size of the board of county commissioners from three to five under RCW 36.22.055, which applies to noncharter counties between 300,000 and 400,000 population. (Thurston County hit the 300,000 mark earlier this year.) Voters in the Port of Olympia, covering all of Thurston County, also approved an increase from three to five commissioners. The port and county established a joint redistricting committee to align their district boundaries.

Walla Walla County voters said yes to a proposition clarifying the use of revenues for the county’s decades-old juvenile detention and jails sales tax. The measure gives the county more flexibility to spend the funds in accordance with state law, including authorizing spending on adult correctional facilities.

In Columbia County, voters rejected a proposed metropolitan park district covering most of the county as well as the City of Dayton, which would have helped build a new swimming pool. Dayton’s previous swimming pool closed in 2017 and has not been reopened due to safety and drainage issues.

Voters approved all four fire district mergers and annexations on the ballot:

San Juan Island voters rejected a bond measure to build a new library in Friday Harbor, which would have replaced an existing library. The library district is continuing to pursue other state and private grant funding.

Voters in Morton approved the city’s withdrawal from the Timberland Regional Library District. The library district spans five largely rural counties, and Morton had been annexed since 2014. To serve the city, the district had established a library kiosk at the local community college and hosted a twice-monthly “pop-up” library at a church. However, the nearest permanent library facility is 25 minutes away, frustrating some residents.

In Castle Rock, a one-year excess levy for library maintenance and operations fell short once again. This is a levy that the city submits to voters every year, and, according to our database, it has received at least 55% support every time dating back to at least 2012. However, the levy has fallen short of the required 60% supermajority and/or voter turnout requirements in recent years. The library has operated without tax revenue since 2020, depleting its reserves and operating on donations, and is staffed by a single volunteer librarian.

In Chelan County, voters approved two ballot measures creating and funding the new Chiwawa Mosquito Control District. The district was originally approved in 2020 but the funding measure fell short of the required 60% threshold, requiring a new attempt. However, after the election a lawsuit was filed alleging improper procedures.

Several home rule charter jurisdictions asked voters whether to implement ranked-choice voting (RCV), with voters in Seattle narrowly approving the switch and voters in Clark and San Juan counties rejecting it. I’ll save a detailed discussion of RCV for another day, but you can refer to the National Conference of State Legislatures for a basic overview, including arguments for and against.

Seattle’s process began with a citizen initiative to adopt “approval voting” in which voters select all the candidates they approve of without ranking them. The city council and mayor countered with their own proposal to adopt ranked-choice voting instead. The ballot measure was conducted in two separate questions: the first asked whether voters wanted to change the current system (voters narrowly said “yes”) and the second asked whether voters preferred approval voting or RCV (voters overwhelmingly favored RCV).

We are not aware of any other jurisdictions in the state currently using RCV and our guidance has been that only charter cities and counties can likely adopt RCV under current state law. Pierce County briefly implemented RCV in 2008-2009 but abandoned the process after the state adopted the current “top two” system.

In Spokane, voters narrowly rejected a proposed charter amendment that would have given the city council more authority over the city attorney’s office and made other related changes. We have written previously about balance of power issues between city councils and mayors, including a 2014 blog on acquiring legal services.

Voters in Clark County approved two charter amendments requiring the county council to consult with all county executive elected officials before hiring a county manager, as well as updating the processes for filling vacancies. However, voters rejected amendments to establish a diversity and inclusion position and advisory council, reduce the number of signatures needed for initiatives and referendums, and add a charter preamble.

In San Juan County, voters rejected charter amendments to establish a public advocate position, make changes to the charter review process and budget, and reduce the number of signatures needed for initiatives and referendums.

There were plenty of other results I don’t have the space to write about. To see the full results, visit our Local Ballot Measure Database, select “Filter by Ballot Categories,” and then select “Most Recent Election.” You can also view older election results or filter the ballot measures by funding source, subject, type of government, and/or county

We are a small city and I get asked from citizens if they can vote on the city keeping our law enforcement contract, or starting our own city police force. Is there a way for citizens to vote in this topic?