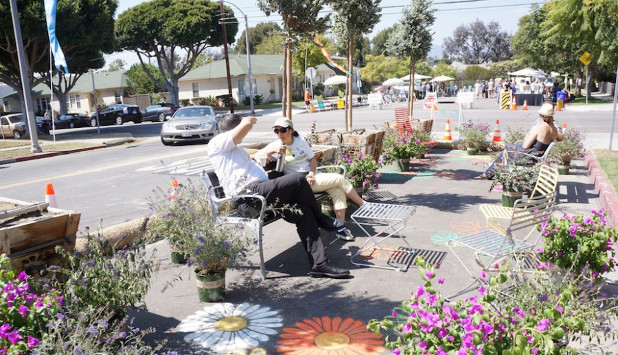 A temporary parklet in Santa Monica. Photo courtesy of Melendrez.

Over the last decade, a new approach to placemaking has become part of the municipal toolbox: tactical urbanism. It’s a strategy that looks beyond the traditional placemaking techniques, which often require highly involved planning processes and major capital investments, and instead promotes inexpensive, small-scale, and often temporary projects that can be modified over time based on community input. Tactical urbanism has inspired some truly transformative projects across the country, mostly in major metropolises. But when we look at the principles that underlie tactical urbanism, we see that they can work equally well in small cities and towns; indeed, the strategy may be even more applicable to both the cultural and municipal contexts that exist in smaller communities.

A New Approach to Urban Planning

The concepts that would eventually become tactical urbanism really came into their own after the Great Recession, when planning departments were looking for cheap ways to improve neighborhoods. Without money for major park, sidewalk, or other infrastructure improvements, planners, with the help of citizens, started to experiment with grassroots interventions designed to achieve the same goals as these more traditional projects: beautifying areas or creating more pleasant places for people to gather or walk. The term “tactical urbanism” itself was codified in 2010 by Mike Lyndon and popularized by a book he helped produce, called Tactical Urbanism: Short-term Action for Long-term Change (available as a free e-book).

Tactical urbanism projects come in all shapes and sizes. One of the more common tactical urbanism projects is creating a public gathering space by painting a section of street and filling it with a few moveable chairs and planters, as was done so iconically in  New York City’s Times Square. Other common projects under the tactical urbanism banner include painting street intersections, a tactic used in both Seattle and Portland as a cheaper traffic calming device, and temporary wayfinding signs, employed in Raleigh, North Carolina as a way to encourage walking by highlighting places of interest. 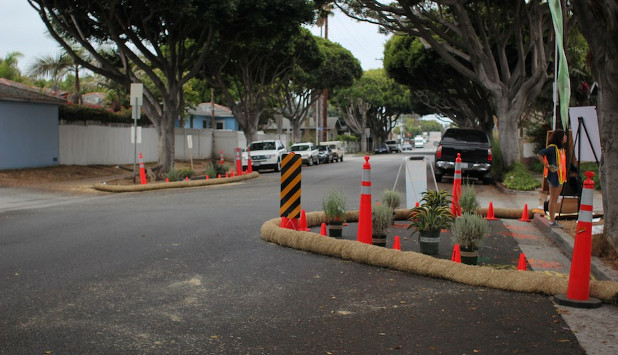 A simple and cheap way to create a more human-friendly street. Photo courtesy of Melendrez.

The Value of Tactical Urbanism for Smaller Communities

Understandably, it can be challenging to see how planning strategies used in large cities, like New York City or even Raleigh and Portland, can relate at all to a smaller city or town. But in many ways, the underlying principles and techniques can be leveraged just as well, if not more so, in smaller communities looking to improve their community spaces.

First and foremost, tactical urbanism emphasizes frugality, a concept that municipalities with smaller budgets must always be thinking about. In many small towns, capital budget dollars need to go to necessities, and let’s face it, building a shiny new public plaza or making street improvements to a commercial strip generally don’t make the cut. But using tactical urbanism techniques can be a great way to achieve the same goals without the big investments. For example, using spray chalk, hay bales, traffic cones, and potted plants to create temporary traffic diverters is a low-cost method to test their effectiveness as a traffic calming device for a neighborhood street (see picture above). Working with local businesses to participate in Park(ing) Day or even creating a permanent “parklet” are other great ways to liven up a street and draw people to the commercial core for shopping and eating; and they often can be done at a cost of almost nothing. 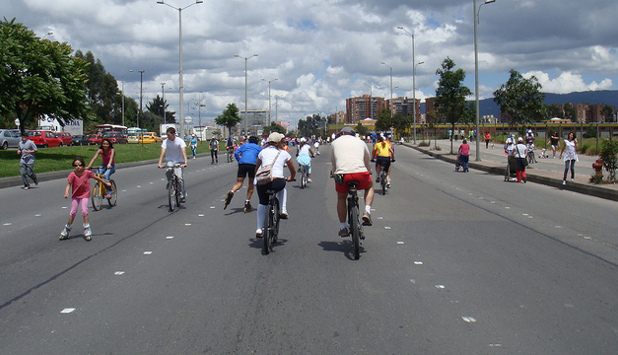 A street is closed temporarily for people to try out other forms of transportation. Photo courtesy of Saul Ortega.

Another great aspect of tactical urbanism projects is that they can be temporary, providing a great opportunity to test things out without any major commitments. For example, the popularity of cycling is growing across the United States as a means of both transportation and exercise. But major street overhauls that add bike infrastructure can sometimes cause major tension between various community groups. A tactical urbanist solution to this problem might be to create a temporary cycling (and skateboarding and rollerblading) course through city streets once a week in the summer, a technique made popular by Bogota’s Ciclovia. This allows the community to get familiar with cycling in their town while also allowing town planners to gauge interest and test out different routes before committing to any specific infrastructure investments.

Finally, but perhaps most importantly, tactical urbanism is an incredibly powerful citizen engagement tool. Tactical urbanism rejects the classic “design-present-defend” method of planning and, instead, uses small scale projects to engage the public in a dialogue about the future of their community. Small cities and towns across the United States are going through a major period of transition. Engaging community members through tactical urbanism projects can be a great way for city leaders to learn about citizen priorities. You could even borrow some ideas from Ithaca, where the mayor converted his parking space at city hall into an outdoor community gathering space where he talks with citizens. 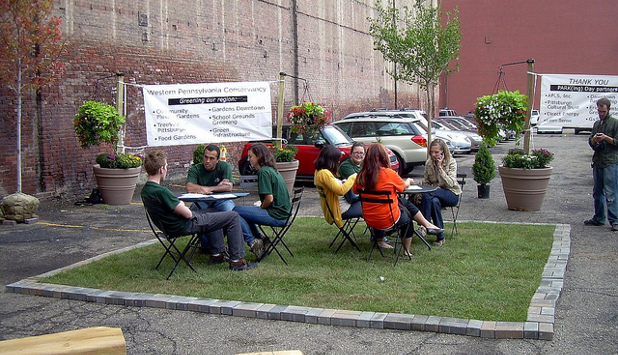 Discussing the future of the city in a parklet in Pittsburgh. Photo courtesy of Kordite.

Tactical urbanism offers smaller cities and towns a way of testing out and engaging their communities in new placemaking techniques, without requiring major capital investments. In our region, the big cities of Portland and Seattle have been using tactical urbanism, but smaller cities are also starting to try it out, including Tacoma, Olympia, and Milwaukie, OR. No matter how big your jurisdiction, we encourage you to explore this novel new planning approach to see what it can do for your community.

Please share your comments, thoughts, and projects in the comments below. You can also contact me directly by emailing me at jmahar@mrsc.org.

Josh served as a Communications and Outreach Coordinator for MRSC and wrote about social media, government performance, and other local government topics. He no longer works for MRSC.
VIEW ALL POSTS BY JOSH MAHAR
MoreHide

The Greening of Main Street

Making room for housing near transit: zoning's promise and barriers