Using a Scavenger Hunt and Gamification to Unite a Growing City 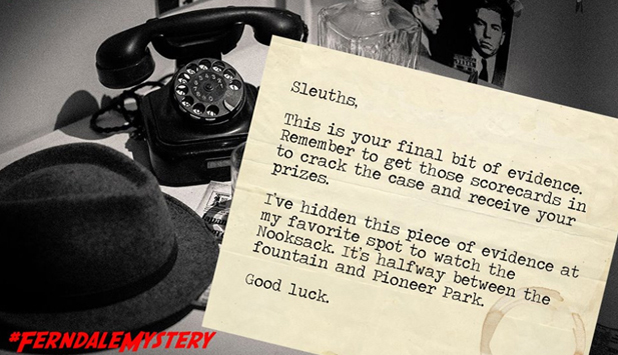 Over the last five years, the City of Ferndale faced a big but not unusual challenge; too many new neighbors. Since 2013, Ferndale had grown from 11,000 to over 14,000 residents, with more arriving every day. The locals grumbled that the new residents didn’t know the history of the town and the new residents struggled to connect with the evolving community.

The city also had a few, small neighborhood parks that were woefully underutilized, both by new and current residents that, as the head of our Parks and Recreation program, I was tasked with changing. Even though I was new to my job, I figured why not try something big and ambitious that might promote unity among all residents and get more people into city parks? To accomplish this, we designed the Great Ferndale Treasure Hunt in 2017, which was such a success that we brought back a sequel in 2018: the Great Ferndale Midsummer Mystery.

The premise was simple: a city-sponsored scavenger hunt that all Ferndale residents could participate in with small prizes as enticements. The implementation was also straightforward. Each week during the month of July, the city would release two clues; online on our social media accounts and printed notices posted at city hall and in the library. The clues would lead participants to city parks looking for hidden banners that displayed a word scramble. Participants who could unscramble the banners in the correct order could then solve a riddle, which was generally based around the event theme, such as: “Who stole the spirit of Ferndale?” (from the 2018 Midsummer Mystery)

Each year, we kicked off the scavenger hunt with a video that gave people a preview of the game, including instructions on how to participate. The event scorecard, downloadable at the city website, also covered similar information and included a preview of what participants could win.

This is where "gamification" comes in. Gamification is when you apply game-design elements to non-game contexts — or to put it another way, if you tell someone they will receive points for doing various activities, they will jump through any number of hoops to get the high score.

Participants were encouraged to team up with other residents and use a scorecard to keep track of the clues provided via banners. The scorecard also offered a whole list of activities participating team members could take to score points, including;

Participants took to the challenge with gusto and as the scorecards came trickling in, so did the stories. Two neighbors discovered that they both have family in South Dakota, a group of seniors used the scavenger hunt as an excuse to go biking every week together, a pair of young children glimpsed a coyote for the first time across the Nooksack River, and a recent empty nester forged a new friendship with an elderly neighbor.

Many participants shared their excitement at discovering “new” spots to visit in Ferndale as the clues led them to neighborhood parks. Parents were relieved to have something for children to do outside, away from their electronic devices, and local organizations were grateful for the foot traffic.

All told, 61 residents participated in the first year. However, by the second year that number ballooned to 168 participants. Actual participation may have been higher, but the city counted only those participants who completed the scavenger hunt and turned in scorecards.

In terms of cost, the program was not terribly expensive, with a total cost of under $3,000. The biggest expenses were prizes and banners. In terms of labor, it did not take much time to manage, although I did fuss with the clues quite a bit to ensure that they were appropriately difficult but easy enough to encourage participation. With so much positive feedback and interaction, we have already scheduled the Great Ferndale Alien Abduction for 2019 to continue this tradition for all the residents of Ferndale.

For more information about this or any Ferndale Parks activities, please email me at rileysweeney@cityofferndale.org or contact me via phone at (360) 685-2353.

Riley Sweeney is the Communications Officer/Recreation Coordinator for the City of Ferndale, Washington. His background as a community organizer and civics enthusiast helps him connect with his fast-growing city of 14,000 residents.

As part of his job, he does everything from answering citizen questions on social media to facilitating Eagle Scout projects in Ferndale’s parks. In 2016, he received the Peacebuilder Award from the Whatcom Dispute Resolution Center for his work coordinating the largest volunteer event in Ferndale’s history, the construction of a new playground.

The views expressed in guest columns represent the opinions of the author and do not necessarily reflect those of MRSC.

Thurston County asked the public how to spend its money. Here are the responses it got

Are there certain records that local governments must post on their websites?