Are You Calculating Your City Utility Tax Correctly? 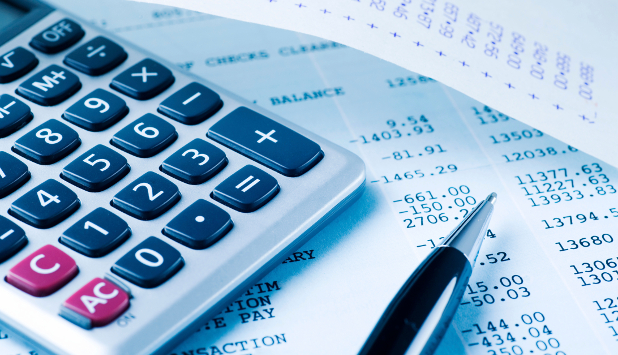 This post was written by Gordon Wilson and Tage Aaker of the FCS Group.

Many Washington cities have a city utility tax or a business & occupation (B&O) tax that applies to utilities within city boundaries. These taxes are usually defined in the city code as a “gross receipts” tax—that is, a percentage of the gross revenues of a given utility, just as the state B&O tax is a percentage of the gross receipts of a given business. While this looks straightforward to calculate, it is not necessarily so. While reviewing cities’ utility finances, we often notice a discrepancy between city code and how the tax is calculated. As a result, many Washington cities collect less money into the general fund than is allowed by their city code.

There are two common ways to administer a city utility tax. One way is to embed the tax in the utility rates. For instance, if a water utility is being taxed at a rate of 10%, all of the rate revenue is collected in the water fund, and then 10% of that revenue is transferred to the general fund. With this approach, the water rates are set to generate enough money to pay the tax, and the amount transferred to the general fund is correctly calculated as 10% of the gross receipts. This method is the most technically correct way to administer the tax, since a gross receipts tax is intended to be a tax on the business itself, not an indirect tax on the customers of the business.

However, there is a second way to administer a city utility tax, which is to separately itemize the tax on the utility bill. Some cities prefer this method in order to make the stated utility rates as low as possible, or to create visibility for the city utility tax. With this approach, the adopted utility rates do not generate enough money to pay the gross receipts tax; instead, the stated utility rate is applied to a given customer, and then a markup percentage is added on top of the utility charge that would be collected absent the tax. Like the state sales tax, a markup percentage is based on what the bill would be without the tax. For example, if a person is buying retail goods that would cost $100 without the sales tax, and the stated markup rate is 10%, then the markup method would lead to a calculated tax of $10 and a total bill of $110.

How can the tax be calculated accurately if a city wants to itemize it separately on customer bills? Here is an example that is mathematically simple, even though the tax rate is higher than most actual city utility tax rates. Let’s imagine a water utility that needs to collect $100,000 in order to pay its own bills, separate from what it needs to pay the general fund, and that the stated gross receipts tax rate is 20%. Our goal will be to collect an amount that would leave us with $100,000 left over for the water utility’s own costs. If we say, “The tax rate is 20%--let’s just multiply that by $100,000,” then the utility will be caught short, because we would be treating the 20% as a markup percentage. We would collect $120,000, but then the general fund would take 20% of the $120,000 gross revenue (not 20% of the $100,000), if the tax is administered correctly. So the general fund would receive $24,000, and the utility would be left with only $96,000. However, if we collect $125,000, then the General Fund would receive 20% of $125,000, which is $25,000, and the utility will be left with exactly $100,000. We can see from this example that if the tax is collected as an additional item on the customer bill, then the markup percentage needs to be higher than the gross receipts tax rate. 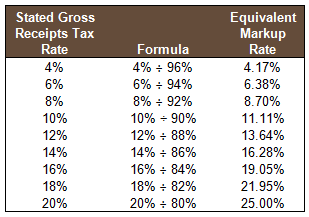 If a city wants to collect its city utility taxes accurately, but also wants to make the tax visible by showing it on the customer bill, how can that be done without confusing the customers? For example, if the bill shows a line showing $100 in utility services and another line that says, “10% city utility tax,” and the amount of the tax line is $11.11, some of your customers will surely call the customer service desk and complain that the city is overcharging them, because $11.11 is obviously not 10% of $100! If both the percentage and the dollar amount are shown on the bill, then customers will inevitably make the erroneous assumption that the tax is calculated as a markup percentage using the rate shown on the bill.

One solution is to show the dollar amount of the tax on customer bills but not the percentage. For example, the bill can show a line for “city utility tax” of $11.11, rather than saying “10% city utility tax.” This approach is exemplified by the bills of cell phone companies, where the added fees and taxes are so complicated to calculate that trying to show the percentage factors would just be confusing. In our example above, where a $100 utility bill is subject to a 10% gross receipts tax (and therefore an 11.11% markup rate), if customers do the math and determine that the actual markup percentage is 11.11%, that is an accurate conclusion when they multiply the percentage by the amount excluding the tax itself. However, if the rate of the city utility tax is already widely known in the community, such an approach might still engender some confusion and mistrust.

The solution we have seen with some cities and private utilities is to state the percentage of the tax but not show the dollar amount. This is done by creating a footnote on the bills stating that “the above amount includes a city utility tax of X%,” without displaying an actual dollar amount. With this approach, the tax should be embedded in the utility rates, so that customers can look at their type of utility service and consumption and correctly figure out their utility bills. However, the footnote would give the tax additional visibility, so customers would know that not all of what they are paying is for utility service alone. A similar footnote can be used to highlight the state public utility taxes that are also embedded in the charge.

And don’t forget that embedding the tax in utility rates is a reasonable option regardless of how the customer bills appear. A gross receipts tax is literally a tax on the business and its revenues, not an indirect tax on the customers of the business. For that reason, the tax is a cost of doing business, and it is completely appropriate to show that cost in your line item utility budget, just like electricity costs or employee salary costs.

GMA at 25: Looking Back, Looking Forward

Chapter 35.80 RCW grants authority for municipalities to assess costs of abatement and penalties/interest against the tax rolls and as a lien against the property when buildings/structures are abated. When no buildings are involved, are cities authorized to assess penalties for nuisance code abatement as an assessment submitted to the county treasurer to be entered upon the tax rolls?